US exports increase in 2011: Possible changes in trade patterns on the horizon

Piers reports US containerized exports will increase around 5.8% for 2011 while containerized imports will grow only 2.2%. The strength in exports is an opportunity for the US trade balance to become more balanced as the US has long been dependent on imports.

Many US ports have reported increases in exports. However,the two largest US ports have reported mixed results. For Los Angeles, total TEUs are up about 1% for the year, however 2011 will be a record year for exports for the port as for the first 11 months of 2011, 1.9m cargo containers were exported compared to 1.8m for all of 2010.

For the Port of Long Beach, total TEUs declined 17.6% in November. Imports declined 15.6% and exports declined 22.2%. Part of the decline is due to the departure of California United Terminals which left one of the port's container terminals. It had accounted for about 10% of overall container traffic. Also, port authorities blame cautious retailers that did not place big holiday orders for imported goods. 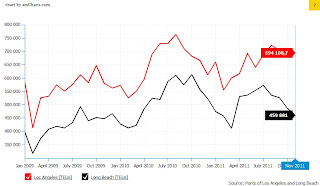 Trade was strong during the first half of the year. However, it appears increases in cargo may be in decline during the last few months of 2011 due to weakening demand from Europe. In October, even demand from South America declined. According to Piers, US exports to Brazil fell 25%. However, as noted in Transport Intelligence’s Global Monthly Monitor, changes in trade patterns appears to be taking place as emerging markets such as Russia, the Middle East and Africa increase trade. For example, Piers notes that US exports to Africa increased 20% in October thanks to grocery products, poultry and vinyl alcohol. Even exports to China increased, although at a lower rate, 4%, during October due to demand in commodities such as logs and lumber, wood pulp and meat.

For more information on emerging markets, Transport Intelligence and Agility will publish its Emerging Market Logistics Index in January.