US West Coast ports are crying foul as business appears to be booming at the Canadian West Coast ports. As a result, US lawmakers requested the US government to look into the matter which resulted in the US Federal Maritime Commission voting to sanction a report that is critical of Canadian ports.


According to news reports, the commission’s findings allege that Canadian ports on the West Coast are deliberately luring cargo business away from American West Coast ports. Canadian officials deny the allegations.


In either case, the US Federal Maritime Commission report has now been sent to Congress to consider such fines as a possible $140 per container levy on cargo entering the US after passing through Canadian West Coast ports.


Another possible fine may include another type of tax. For example, some US Senators have noted that the US Harbor Maintenance Tax is not collected at border crossings when cargo enters the US on trains from Canada after arriving in North America via Canadian ports. This tax is levied in part to cover the cost of dredging port channels on the US West Coast ports. However, dredging is not necessary in Canada’s Prince Rupert port or Vancouver port.  Canada instead charges importers a user fee that goes toward port maintenance.


The ports of Los Angeles and Long Beach combined control 72% of the West Coast container market. However, the two ports are facing competition up and down the coast from Seattle and Tacoma in the US to Mexico’s port of Lazaro Cardenas to the Canadian ports of Vancouver and Prince Rupert. Not to mention the US East Coast ports are likely to be a competitive threat particularly as the enlarged Panama Canal is scheduled for completion in 2014. All of these ports have made significant improvement in infrastructure within the ports themselves as well as rail and road improvements to connect to the US interior. It is also likely with the intermodal hub network that rail and trucking companies have established have also greatly benefited many ports on both coasts.


Hopefully a reasonable solution will result between the US and Canada. Instead of possible protectionist measures, perhaps competition is good and will drive additional efficiencies and lower costs for shippers on both coasts. 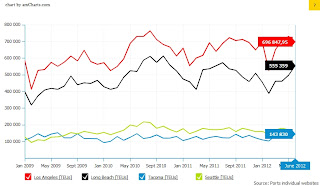 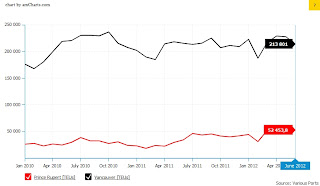