This is comparable to Expeditors International of Washington which also noted revenue declines. For 2012, Expeditors reported net revenue per kilo for air freight declined 7% and net revenue per container (FEU) declined 4%.
Although many major freight forwarders noted declines in airfreight tonnage for fourth quarter, UTi’s decline of almost 11% was a bit alarming. This may be due to the time period of the company’s earnings which is for November through January as compared to October through December for most other providers. 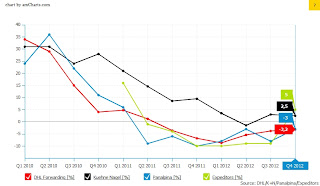 UTi’s ocean freight tonnage increased 6.1% for fourth quarter. This was a higher increase than that of other freight forwarders for the quarter. This may indicate the company’s ability to react quicker to the shift towards ocean freight and/or it could be due to its customer mix.
Ocean Freight Tonnage Comparison by YoY Percentage Change 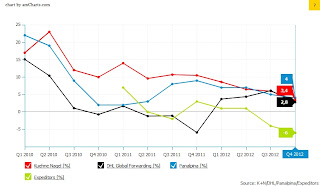 The outlook for first quarter 2013 does not appear to be optimistic for UTi Worldwide. According to its CEO, Eric Kirchner, combined January and February airfreight tonnage may be down around 11% while ocean freight tonnage may be down about 5%. March may be a bit better give or take 2%-3%, up or down from March of 2012.
Overall, freight forwarders continue to face a tough market – despite pockets of optimism, the overall global economy remains questionable, tradelane shifts, capacity shifts/cuts and modal shifts are all affecting the freight forwarding market. As shippers opt for cost over time to ship goods, will a consolidation within the freight forwarding market occur or will we see new solutions as freight forwarding companies strive to differentiate themselves from the rest of the pack?