US manufacturing continues to slip

April manufacturing activity appears to be slowing up as the Institute of Supply Management (ISM) reported a slight decline in US activity. In fact, US manufacturing has been slowing for the past 7 months and is now teetering on possible contraction if growth slows further.


New orders increased 0.9 points which represents the fourth consecutive month of growth. However, new export orders declined for the first time this year. Disappointing but not a big surprise particularly as export orders increased a whopping 12 points from February to March. The apparel, printing and furniture industries noted increases in new export orders while primary metals, computer & electronic products; and miscellaneous manufacturing reported declines in such orders.


Inventories contracted for a second straight month while employment grew at a slower rate despite production increasing 1.3 points.


So what does all of this mean for logistics providers? More than likely for many providers, it remains business as usual. Although export order orders declined, it still remains fairly strong due to positive gains during first quarter. In fact the apparel industry appears to be an industry logistics providers may want to focus on because it has reported increases in export orders for each month this year so far. This should also bode well for ocean freight demand as most apparel tends to move by this mode of transport.


And finally, inventory levels are contracting. An inventory build-up was apparent as many shippers built up stock ahead of a US east coast port strike that did not materialize. As such, it appears many manufacturers maybe working from this stockpile. Also, it was noted in the recent ISM report that customers’ inventories are too low. Declining inventory will need replenishment probably in the next couple of months in preparation for third quarter. As such, transportation providers should benefit from this demand. In particular, this could boost rail intermodal demand much like it did after the 2011 Christmas holiday season.


The slowing of US manufacturing appears to be a reflection of a slow, but growing US economy. Most economists forecast a small increase in economic growth for 2013, and as a result, transportation associations expect cargo transportation demand to follow along with economists’ predictions for the US economy – slow growth.
North America PMI Activity 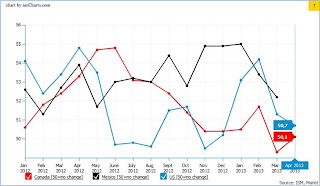