Port of Hong Kong strike effects on US ports questionable

Better working conditions and a pay increase are behind a two-week strike at the port of Hong Kong. However, it appears Li Ka-shing, who controls half of the capacity at Hong Kong and almost as much at neighboring Shenzhen/Yantian is not budging on concessions for workers.


Meanwhile, cargo is reportedly piling up at the port. According to the Hong Kong Association of Freight Forwarding and Logistics, approximately 120,000 TEUs have accumulated at the port since the strike begun.


How is the strike affecting the US ports? Based on the most current Zepol data, March shipments from the port of Hong Kong were down year-over-year by 18.6%.  However, before alarms are sounded, one needs to take note the Chinese New Year holiday in February may also be attributing to this decline – manufacturers probably did not reopen businesses until late February at best which would account for lower shipments in March.  In fact, US import shipment totals for other Asian ports are low as well as noted on the chart below: 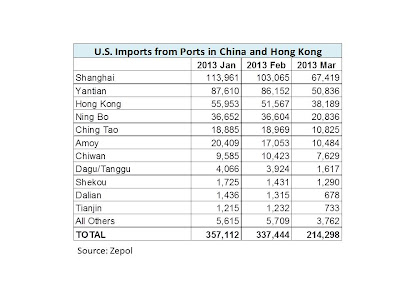 
April shipment data will probably be more telling for potential adverse effects US ports may have suffered due to the Hong Kong strike.
While the strike will certainly hurt the third largest port container in the world, the port of Hong Kong has struggled to remain competitive with other ports in the area. For 2012, total TEUs declined almost 5.0% for Hong Kong while increases of 5.7%, 2.9% and 5.0% were noted for ports of Singapore, Shanghai and Busan. 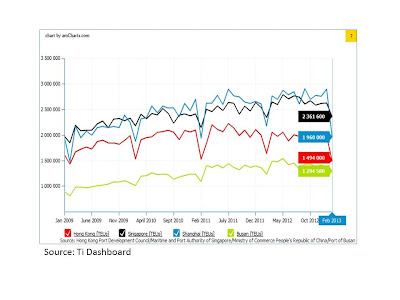 For US ports, shifts away from Northern Asia in favor of Southeast Asia have been observed. This is likely due to manufacturing shifts to such Southeast Asian countries of Vietnam, Thailand, Cambodia and Indonesia. As such, Singapore’s port may be a more likely port to utilize due to its proximity.
Posted by Cathy Morrow Roberson