In search of funding for infrastructure projects

US infrastructure problems have been chronicled for quite a while including such examples, noted in an USA Today article, as:

The costs of  such bottlenecks is estimated at over $200bn a year, or 1.6% of US economic output according to Building America’s Future Educational Fund, a bipartisan coalition of elected officials.
However, how to fund these projects?  True, the transportation bill was finally passed after great debate in Congress but it is not enough to address all the needed improvements.  Many of these projects are now falling to the states, which are also fighting budget cuts.
On July 31, people in the state of Georgia will vote on a one cent sales tax to fund transportation projects across the state such as widening of roads, extending roads and ramp extensions.
The approach towards the passage of this bill is quite interesting.  The state is divided into 11 regions with each county submitting a list of projects to be included for funding.   People will be asked to vote on the bill for their particular region, not for the state overall. So, the results could be approved in some regions and not for others. If approved, one cent will be added to the sales tax for each county in the particular region (Currently for Fulton county, the sales tax is 7% whereas in Cobb County it is 6%).
The Georgia transportation bill is facing stiff opposition from such groups as the Sierra Club, the NAACP and the Tea Party political group – all citing the bill as unconstitutional, not enough thought/research put into the bill, it will increase pollution even more etc. 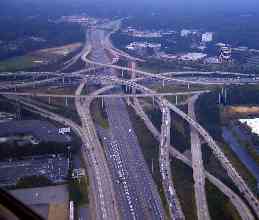 Morning rush hour around Spaghetti Junction (I-285 and I-85)﻿

And what about MARTA? Many MARTA supporters are also in opposition of the bill. Counties such as Fulton and Dekalb already pay a one cent tax for MARTA but somehow the commuter train continues to have financial problems and the inability to expand.
Perhaps what bothers me about the bill is this quote from Senator Saxby Chambliss: “So when folks go to the polls to decide whether or not they want to vote for TSPLOST, if they don’t have a better idea of how we’re going to fund the infrastructure and the transportation needs for Georgia, then this is the best route to go right now.” It seems to me planning and discussion should be done prior to a vote, not after a vote. True, the current political environment makes this a bit difficult but perhaps it’s time for all to come to the grown-up table and set aside their political differences and think about the good of the people and not the good of the political party – Compromise after all has been the key to this country’s achievements.
It is indeed time to implement a national transportation plan that includes responsible funding and an overall connecting plan across all states - not one of patchwork projects.  The state of Georgia has one of the top ports as well as one of the largest international airports in the world.  The major interstates – I-75, I-85 and I-20 all cross through the Atlanta metro area along with major Class I railroads – CSX and Norfolk Southern.  All of these affect the entire economy of the state of Georgia, not just a particular region. Rather than asking voters to fund regional projects, perhaps the state should be asking to raise the state sales tax from 4% to 5% to fund projects based on a well thought out state plan.